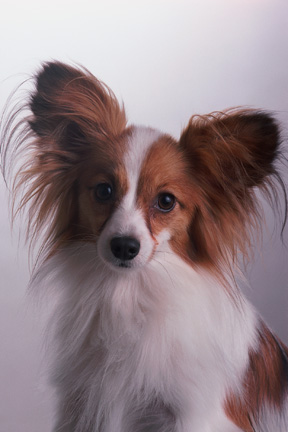 The two adrenal glands are closely associated with the kidneys. Each has a central medulla (approximately one fifth of the total mass of the gland) which produces adrenaline, the so-called emergency hormone. Surrounding the medulla is the cortex which produces several hormones, the most important of which are the corticosteroids. These are further classified into glucocorticoids and mineralocorticoids. The most important glucocorticoid is hydrocortisone (cortisol), while the main mineralocorticoid is aldosterone.

Cortisol regulates the body's metabolism as well as preventing or suppressing inflammation. Carefully controlled production is essential and is achieved through adrenocorticotrophic hormone (ACTH) produced by the anterior lobe of the pituitary gland in the brain.

Aldosterone regulates the amount of water in the body. It is an important hormone but is not controlled by ACTH.

What are the other causes of Cushings disease?

Sometimes the adrenal gland produces too much cortisol even though ACTH levels are normal. Occasionally so-called iatrogenic Cushings disease results from the long term use of preparations containing cortisone.

If treatment is to be effective, it is important to identify the type of Cushings disease if at all possible.

This can be considered the opposite of Cushings.  It is caused by too little production of corticosteroids (both glucocorticoids [cortisol] and mineralocorticoids [aldosterone]) by the adrenal glands. It is usually due to immune mediated destruction of the adrenal glands although occasionally lack of ACTH produced in the brain can contribute.

Addisons disease (hypoadrenocorticism) is a rare condition in dogs and extremely rare in cats. 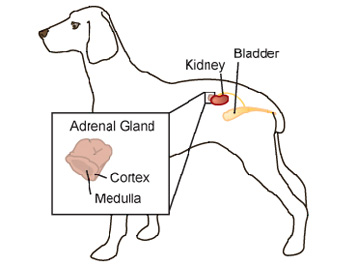 How are these conditions diagnosed?

Characteristic physical signs give the first clue. However, these are not specific and can be associated with other diseases. Consequently the usual blood tests have to be carried out. A complete blood count (CBC) and biochemistry will give an indication of any other problems. Urine analysis is also mandatory. It is a useful check for diabetes as well as other problems.

Once these results have been assessed other specific tests are then carried out.

What are these tests? 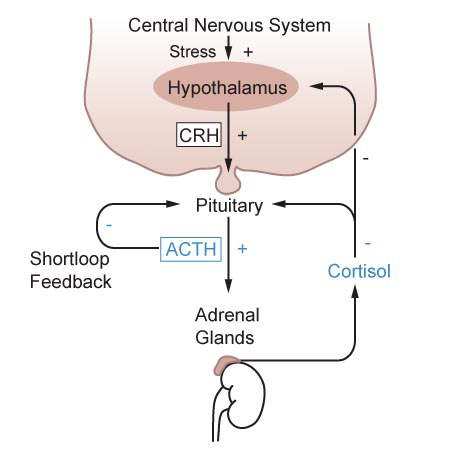 ACTH produced in the brain controls the amount of cortisol produced by the adrenal glands. As the blood level of cortisol rises this has a "feed-back" effect on the brain, reducing the level of ACTH. In the normal animal the cortisol level will start to fall. The ACTH stimulation test mimics the effect of natural ACTH and demonstrates the ability of the animal's adrenal glands to produce cortisol in response to the injection. Two blood samples are required, about an hour apart. A patient with Cushings disease may show a high cortisol level initially with a further increase after the synthetic ACTH injection. This is more commonly seen with pituitary Cushings disease (which is the most common) but can also occur with the less common adrenal Cushings disease.  Dogs with possible iatrogenic Cushings (due to administration of corticosteroids for other reasons, e.g. skin problems) usually show either a very mild or no response to the ACTH stimulation test.

A low dose dexamethasone suppression test is a similar type of test. A low dose of synthetic corticosteroid preparation (dexamethasone) is injected. Three separate blood samples are required. This test may be able to differentiate between Cushings disease of pituitary origin from adrenal origin.

Further tests such as the high dose dexamethasone suppression test, measurement of circulating ACTH and ultrasonography may have to be performed in order to arrive at a definitive diagnosis.

What about Addisons disease?

Compared with Cushings disease, diagnosis of Addisons disease is relatively simple. The ACTH stimulation test is used. Patients with Addisons have a low cortisol level in the first blood sample and the sample taken after the injection of ACTH shows little or no increase in circulating cortisol.

Once diagnosed, the pet's history has to be carefully evaluated. Sometimes if there has been treatment with corticosteroid drugs which have suddenly been stopped, temporary Addisons disease can result. Many cases are due to immune mediated destruction of the adrenal cortex, while other causes are due to reduction in the ACTH by the pituitary gland in the brain. Causes can be differentiated by blood tests involving cortisol and ACTH levels.

© Copyright 2015 LifeLearn Inc. Used and/or modified with permission under license.